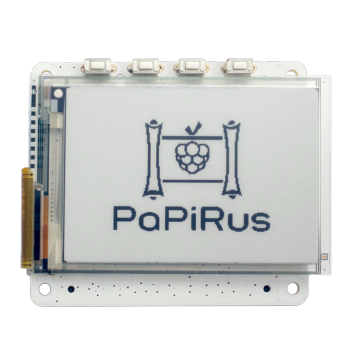 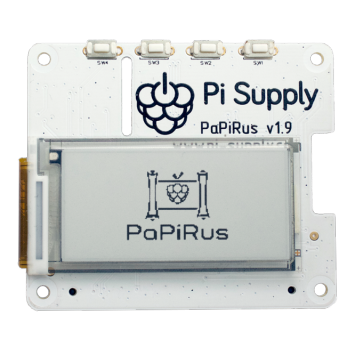 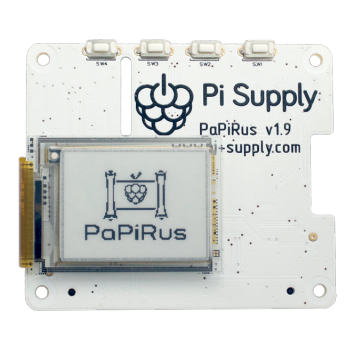 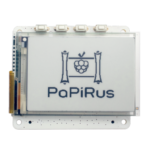 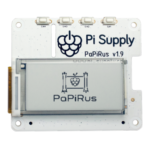 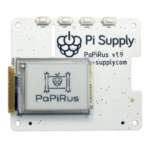 We have been working with Pervasive Displays to bring to market a HAT module, called the PaPiRus, for the Raspberry Pi that is capable of driving ePaper displays of various sizes with ease, making use of their existing open source RePaper codebase and examples.

ePaper is a display technology that mimics the appearance of ink on paper. Unlike conventional displays, ePaper reflects light – just like ordinary paper – and is capable of holding text and images indefinitely, even without electricity. Because of this, ePaper displays and single board computers or microcontrollers are a match made in heaven as together they use a very small amount of power whilst still bringing a display to your project.

We are very excited to offer this very interesting HAT compatible display breakout for hackers who want to start playing with small ePaper / eInk displays in their Raspberry Pi projects. PaPiRus was originally launched on Kickstarter, and is now available to purchase!

The PCB assembly has a lot of driver circuitry required to keep the display running smoothly as well as an EEPROM for HAT compatibility and easy plug and play operation with the Raspberry Pi. All signals are broken out to a 40 pin female header. The display included in this offering is a 1.44? diagonal and 128 x 96 resolution true ePaper / eInk graphical display. These are intended for use as small dynamic signage in grocery stores since a barcode displayed on it can be scanned by a laser barcode-reader. The display does not require any power to keep the image and will stay ?on’ without any power connection for many days before slowly fading. Of course, its also daylight readable and is very high contrast. This makes it excellent for data-logging applications, outdoor displays, or any other ultra-low power usages

The good news is that rePaper/PDI have provided a suite of example code for the Raspberry Pi along with datasheets. Tons more information including wiring diagrams, datasheets & and links to example code at rePaper! Also, check out our eInk/ePaper display for the Pi Zero.