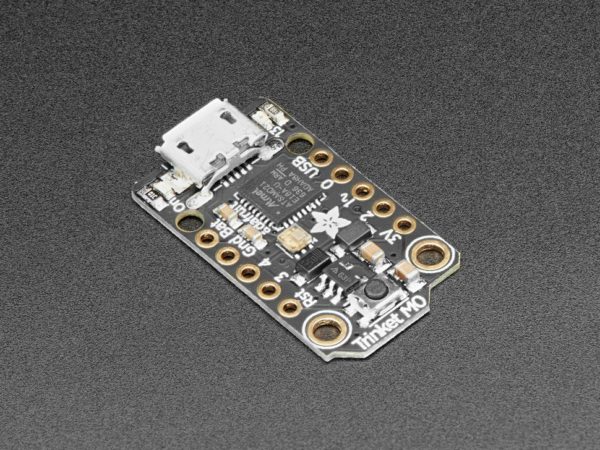 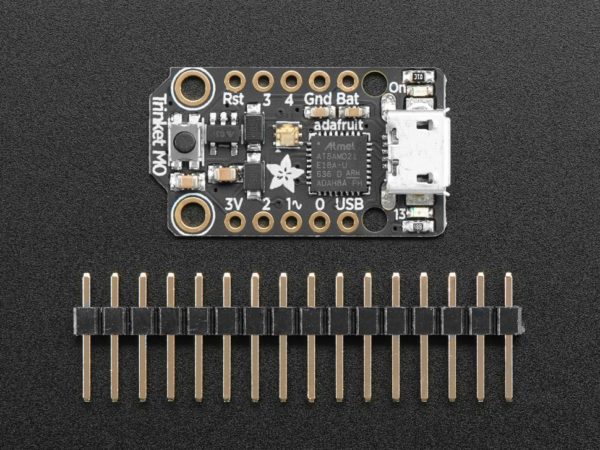 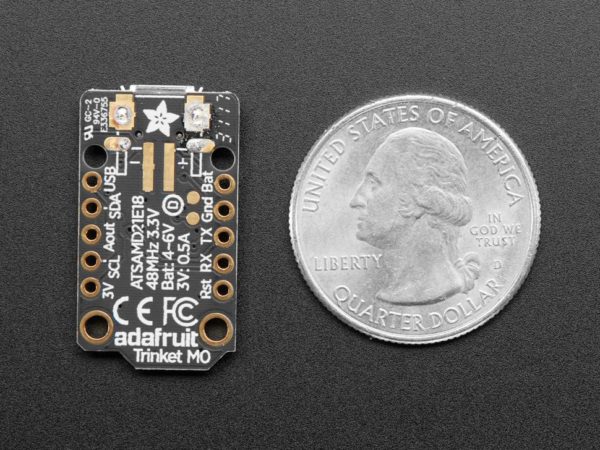 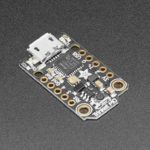 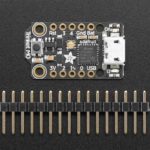 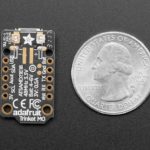 The Adafruit Trinket M0 may be small, but do not be fooled by its size! It's a tiny microcontroller board, built around the Atmel ATSAMD21, a little chip with a lot of power. We wanted to design a microcontroller board that was small enough to fit into any project, and low cost enough to use without hesitation. Perfect for when you don't want to give up your expensive dev-board and you aren't willing to take apart the project you worked so hard to design. It's our lowest-cost CircuitPython programmable board!

We've taken the same form factor we used for the original ATtiny85-based Trinket and gave it an upgrade. The Trinket M0 has swapped out the lightweight ATtiny85 for a ATSAMD21E18 powerhouse. It's just as small, and it's easier to use, so you can do more.

The most exciting part of the Trinket M0 is that while you can use it with the Arduino IDE, we are shipping it with CircuitPython on board. When you plug it in, it will show up as a very small disk drive with main.py on it. Edit main.py with your favorite text editor to build your project using Python, the most popular programming language. No installs, IDE or compiler needed, so you can use it on any computer, even ChromeBooks or computers you can't install software on. When you're done, unplug the Trinket M0 and your code will go with you. Please check out the Trinket M0 CircuitPython guide for a list of capabilities and quick-start code examples – CircuitPython is easier to code but not as low-level and complete as Arduino.

Here are some of the updates you can look forward to when using Trinket M0:

Same size, form-factor, and pinout as classic Trinket
Updating ATtiny85 8-bit AVR for ATSAMD21E18 32-bit Cortex M0+
256KB Flash – 32x as much as 8 KB on ATtiny85
32 KB RAM – 64x as much as 512 bytes on ATtiny85
48 MHz 32 bit processor – 6x as fast as ATtiny85 (not even taking into account 32-bit speedups)
Native USB supported by every OS – can be used in Arduino or CircuitPython as USB serial console, Keyboard/Mouse HID, even a little disk drive for storing Python scripts. (ATtiny85 does not have native USB)
Can be used with Arduino IDE or CircuitPython
Built in green ON LED
Built in red pin #13 LED
Built in RGB DotStar LED
All 5 GPIO pins are available and are not shared with USB – so you can use them for whatever you like!

Five GPIO pins with digital input/output with internally connected pullups or pulldowns
Three of the I/O pins can be used for 12-bit analog input
True analog output on one I/O pin – can be used to play 10-bit quality audio clips
We gave the M0 pads the exact same names as the original Trinket so all your existing Arduino code will work exactly the same as-is without changes
Two high speed PWM outputs – for servos, LEDs, etc
Three pins can also be used as hardware capacitive touch sensors with no additional components required
Can drive NeoPixels or DotStars on any pins, with enough memory to drive 8000+ pixels. DMA-NeoPixel support on one pin so you can drive pixels without having to spend any processor time on it.
Native hardware SPI, I2C and Serial available on two pads so you can connect to any I2C or Serial device with true hardware support (no annoying bit-banging). You can have either one SPI device or both I2C and Serial.

Same Reset switch for starting your project code over
Power with either USB or external output (such as a battery) – it'll automatically switch over
Mounting holes! Yeah!
Really really small

Each order comes with one fully assembled and tested Trinket M0 with CircuitPython & example code programmed in.

So what are you waiting for? Pick up a Trinket M0 today and be amazed at how easy and fast it is to get started with Trinket and CircuitPython!